In one of my pensive modes that came with my profession as a writer, looking at the bright screen, sitting in the dark cave that was my haven the other times, I realised I needed to pause.

The best of escapes are the ones from where you returned with a purpose, a perspective or a rejuvenated idea of living. I wanted all of that. I am the daughter of an officer with the Indian Police Force. My brother is an officer with the Indian Army. With deep ties to people committed to serving the country, I’ve always been curious to experience the kind of patriotism, first hand. That’s what led me to this meaningful solo trip to the Indo-Pakistan border in Punjab.

Located at a distance of around 28 km from Amritsar, the Wagah Border is known as the only ceremonial border between India and Pakistan.

Within a couple of hours, I was already on the flight to Amritsar. Whenever I travel, I like to equate whether or not I score a window seat as a sign of how lucky this trip is going to be. I got one on this trip – I knew then that the Wagah border trip was not going to disappoint me. Looking out of the plane while listening to my favourite country music, contemplating life is seemingly effortless.

A journey, after all, is not just an escape; it’s a series of introspection by the windows of planes, buses, cabs, and trains, in brief, discontinuous episodes.

The view of the beautiful city Amritsar looked heavenly as we kept zooming in. Its gleaming golden temple was visible from the sky above.

I knew I had to board a bus or hail a cab to reach the Wagah border. It was 12 PM, and I had to arrive there before 3 PM if I wished to secure a seat in the stadium to witness the Beating Retreat border ceremony. I booked a cab to reach faster and to avoid too much hassle. 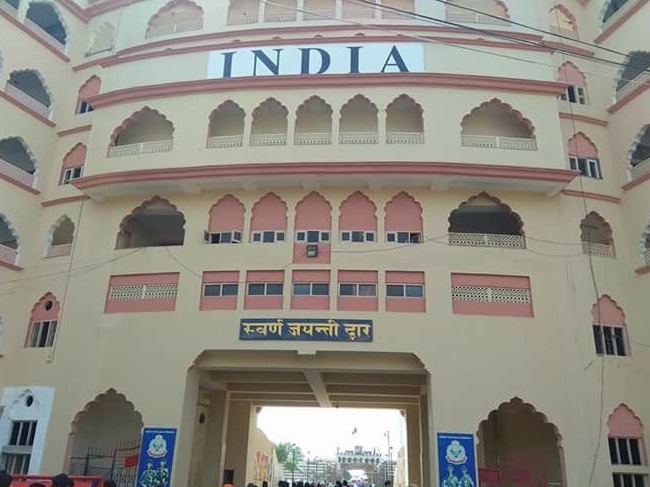 When I reached there, the crowd was already insane! Foreigners had a different entrance, allowing them to enter more easily. Being a local, I had it rough with the frenzied crowd, pushing me from all sides to get into the stadium. It took me an hour to proceed towards the stadium after the security clearance.

Nevertheless, I was glad I made it in time. 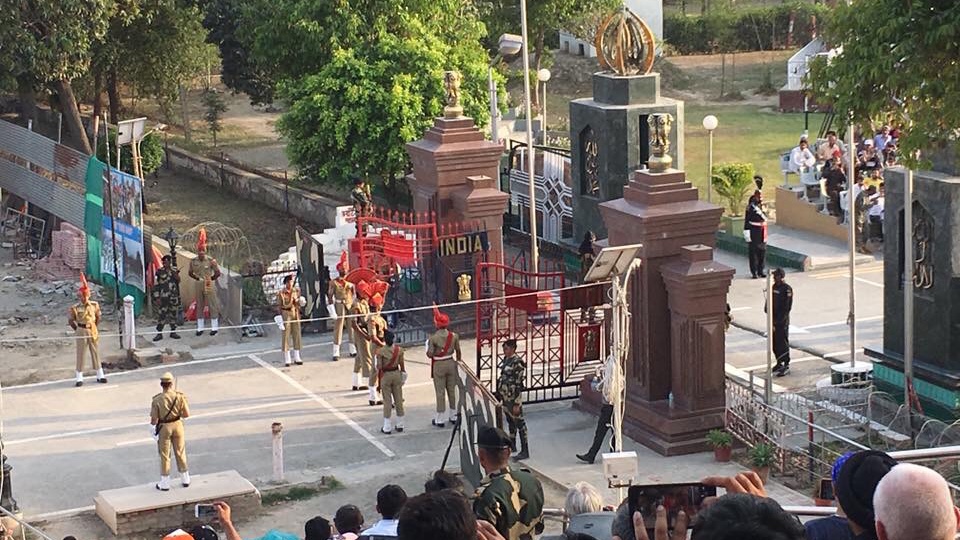 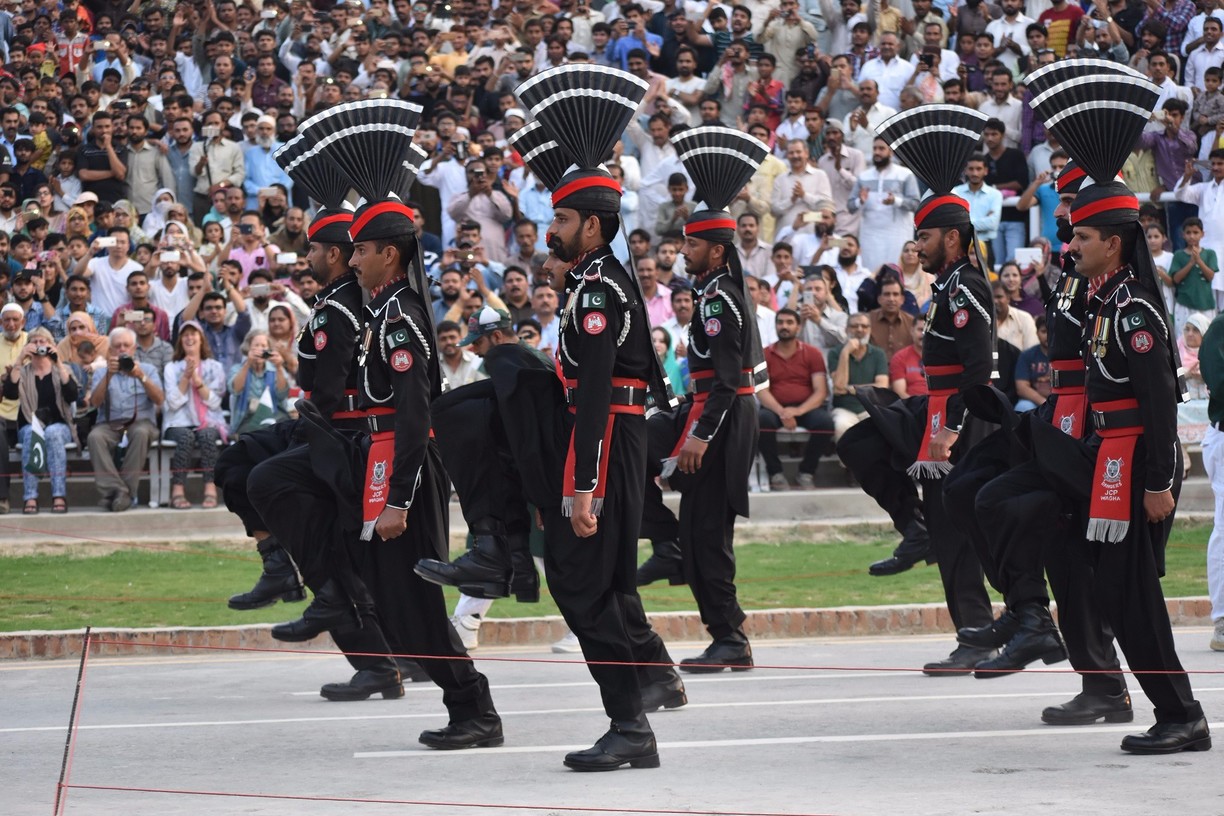 What I witnessed inside the stadium sent chills down my spine. The next couple of hours was the adventure I had been seeking. The enthralling march by the BSF troops in their colourful big turbans, the outcries of “Vande Mataram”, “Bharat Mata Ki Jai”, and “Hindustan Zindabad” (“Long live, India”) kept knocking my heart for days.

The ceremony was simply beautiful. It is a lovely orchestra of different elements from the powerful parade and emotional shouts to the endless cheers in the audience. Until today, I can still vividly remember the energetic and aggressive march that ended up in a handshake and salute. 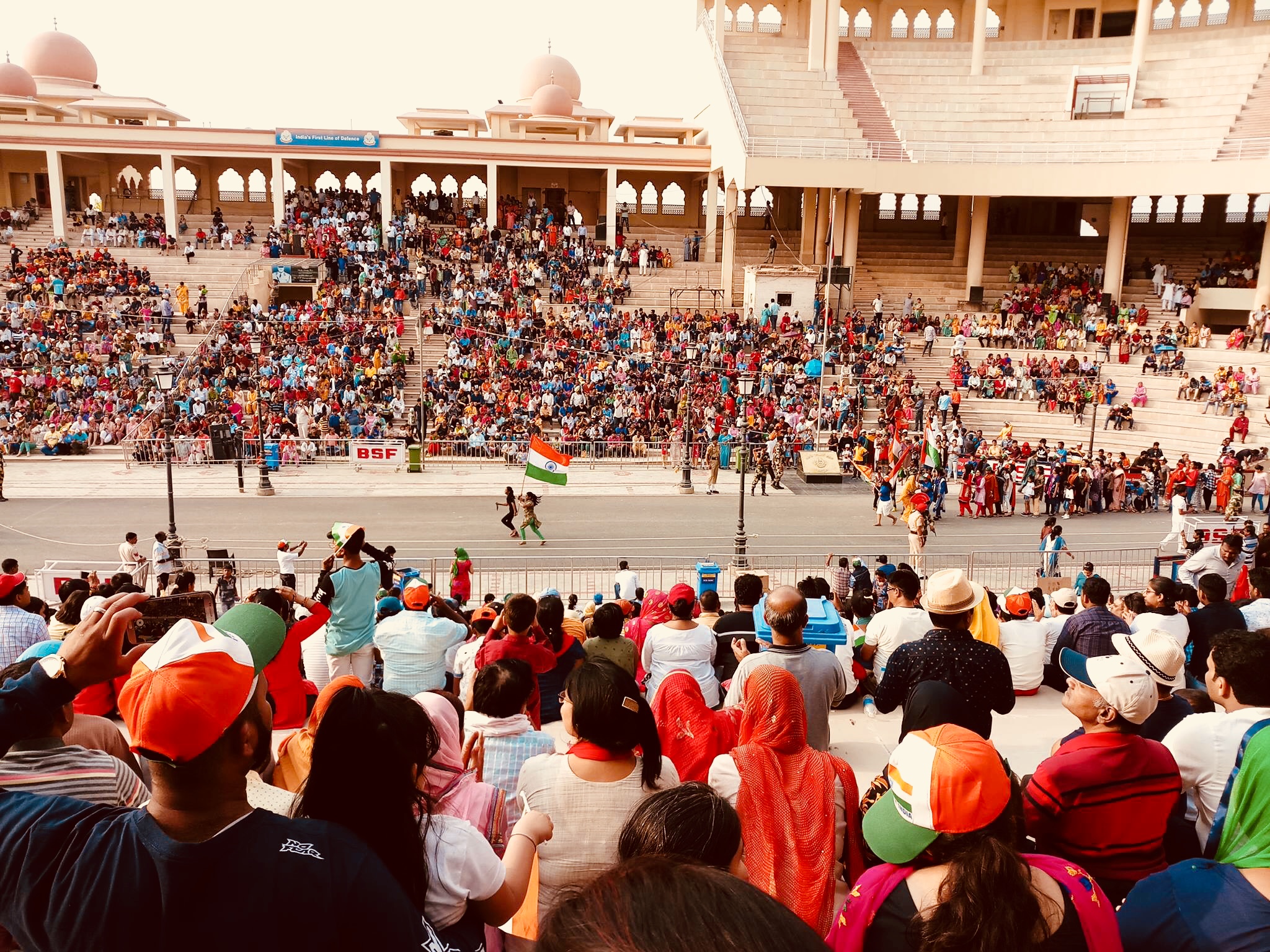 As the sun set, the massive iron gate connecting the two sites was opened.

The words “Swarn Jayanti Dwar” inscribed to the gate caught my attention — it has been almost six decades since the ceremony first started. The infantrymen on both sides of the border stood still while watching the national flags of both countries being lowered simultaneously. The crowd broke into thunderous claps when the soldiers from both sides shook each other’s hands. 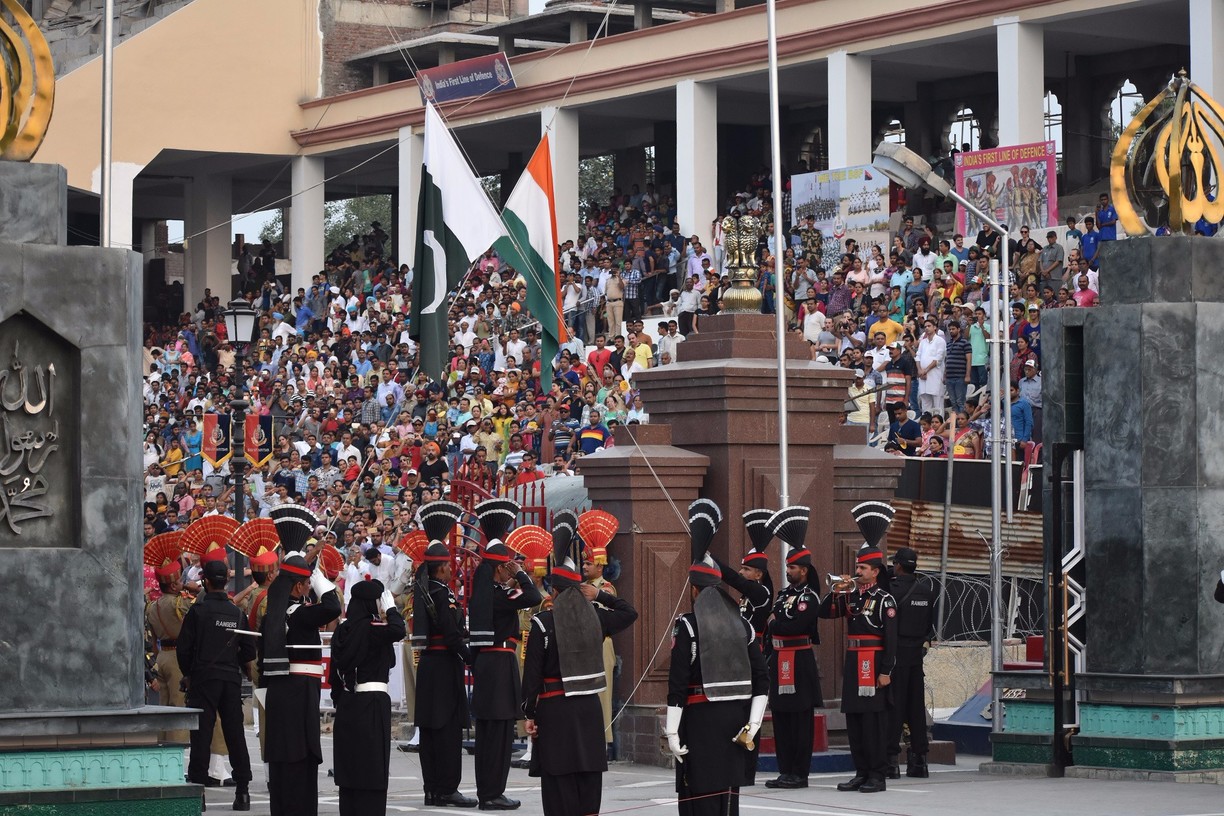 The two nations seemed like two lovers, sharing their strength and emotions in the air. I could feel my heart pumping fast and wild, getting emotional over the ceremony. While to many people, it only seemed like an entertainment offered by the two countries, to me, it was more than that.

It allowed me to revisit my stands regarding the attitudes both the countries had towards each other. I concluded that it was not about the discord that the colonialists caused, nor was it what ensued after the decades-long division. It was no longer a competition. The rallying cheers and powerful gestures reminded me of the solidarity and patriotism of both nations and how lucky I am to have lived through this period of harmony. 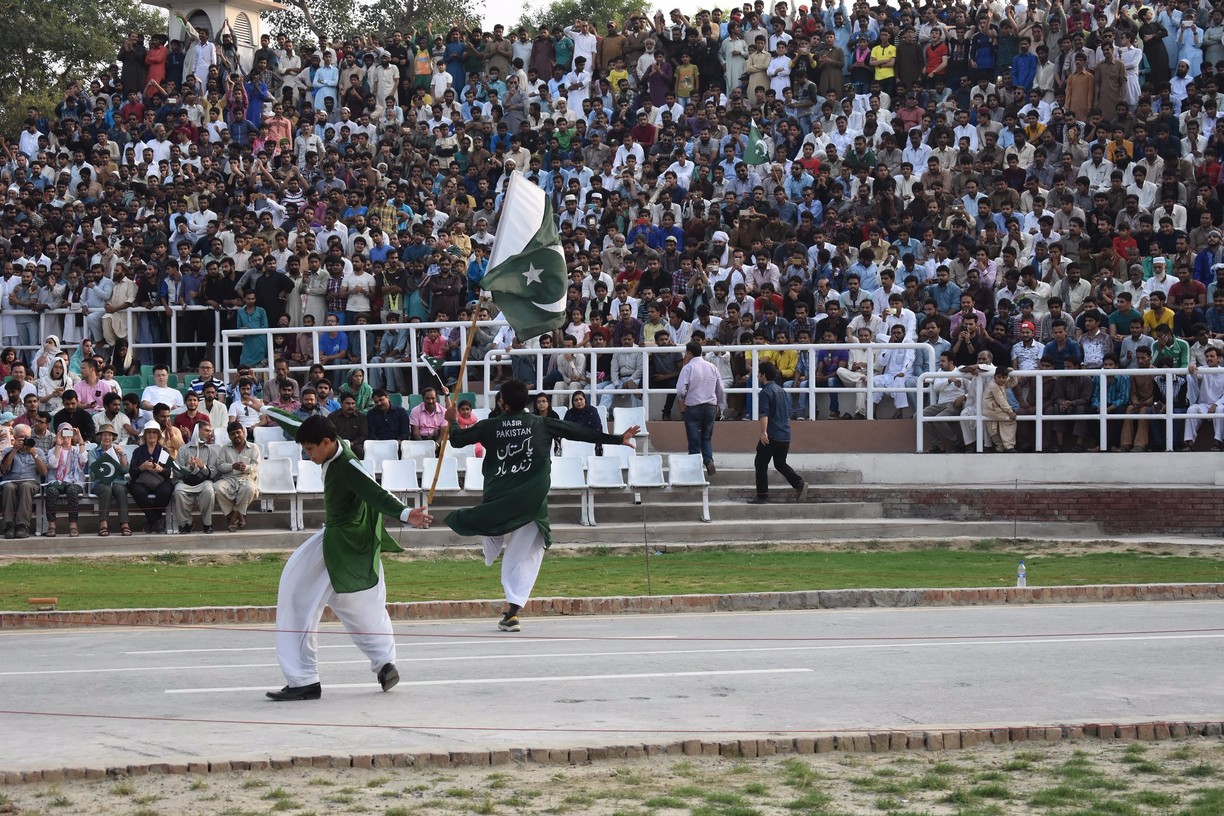 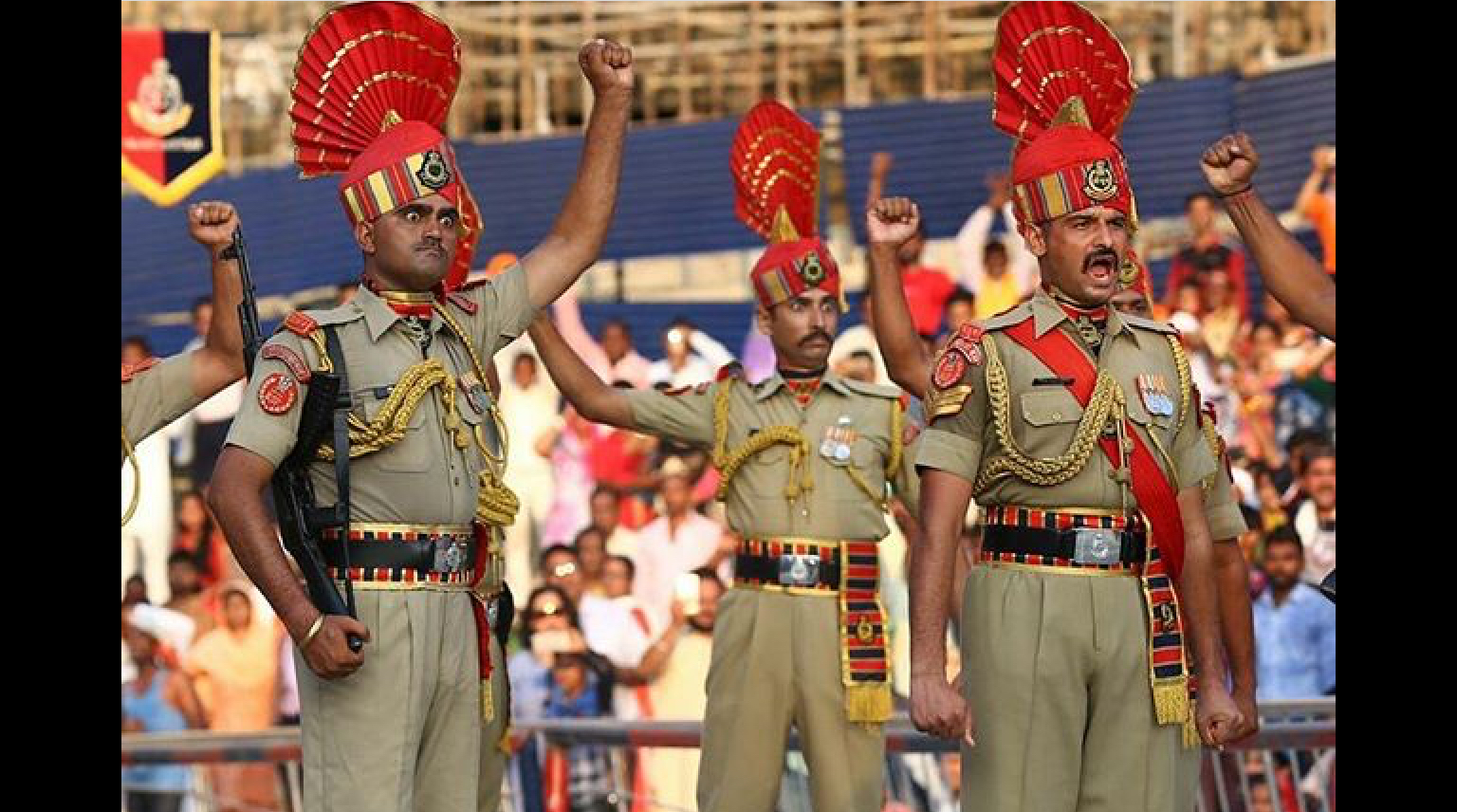 My trip here was the kind of visual extravaganza that the waves of the oceans and the large hills could not contain. The rush of pride and patriotic impulse that echoed at the Wagah border was felt by everybody present in the stadium, binding them together in the “Wagah-bond”.

I found the entire experience was indeed unforgettable. It opened my eyes to see how borders are only social constructs created by humans to define each of us. As I exit the stadium, I found myself amidst the cheers that were no more deafening.

Sometimes all our souls need is a little bit of chaos.

In one of my pensive modes that came with my profession as a writer, looking at the bright screen, sitting in the dark cave that was my haven the other times, I realised I needed to pause. The best of escapes are the ones from where you returned with a purpose, a perspective or a… Continue reading “Wagah-Bonding”: Shedding inhibitions along the Indo-Pakistan borders

The Gateway to Old India: 7 Places in Kochi That Will Transport You Back in Time

Kochi or Cochin is lovingly called the Queen of the Arabian Sea. Once a flourishing port, today Kochi is a major metropolis in the southern Indian state of Kerala. This city is a mixture of many cultures. During the colonial era, it was first occupied by the Portuguese, then the Dutch and finally the British.… Continue reading The Gateway to Old India: 7 Places in Kochi That Will Transport You Back in Time

Sightseeing in Udaipur Through its Rich Heritage

Winter and Rajasthan are one of the most lethal combinations when it comes to a vacation! We explored the “City of Lakes,” Udaipur, during winter when it’s more cooling and windy. Accommodation in Udaipur On top of a mountain, with the cold and foggy weather, one can find Fatehgarh Palace with its quintessential Rajasthani marble inlays, chowks… Continue reading Sightseeing in Udaipur Through its Rich Heritage

Exploring the Best Places to Visit in Varanasi with Gitika

At first sight, Varanasi looks like any other overgrown, chaotic, and congested Indian town. But standing on the steps of one of its many ghats (a series of steps leading to the river) overlooking the expansive Ganga river, I was struck by the presence that only a city as ancient and layered as Varanasi could possess. “Benares… Continue reading Exploring the Best Places to Visit in Varanasi with Gitika