Home » Travel Diary: My Journey in Bhutan, the Kingdom of the Thunder Dragon

Travel Diary: My Journey in Bhutan, the Kingdom of the Thunder Dragon

As soon as the peaks of Everest and Kanchenjunga emerged from behind the clouds, my sister and I went shutter crazy. We were on a flight to Bhutan, and we were hovering over the mighty Himalayas. Mandira, a Bhutanese girl who had made friends with us on the flight, looked bemused at our child-like glee. She had graciously shared with us recommendations on the Bhutan tour itinerary as well as her tips on things to do in Bhutan.

As we descended into Paro, we flew over green valleys, deep mountains, and the silver tinted course of Paro river. The plane tilted its way through two mountains before finally landing at the airport. A huge billboard with the photo of the royal family welcomed us to the Kingdom. 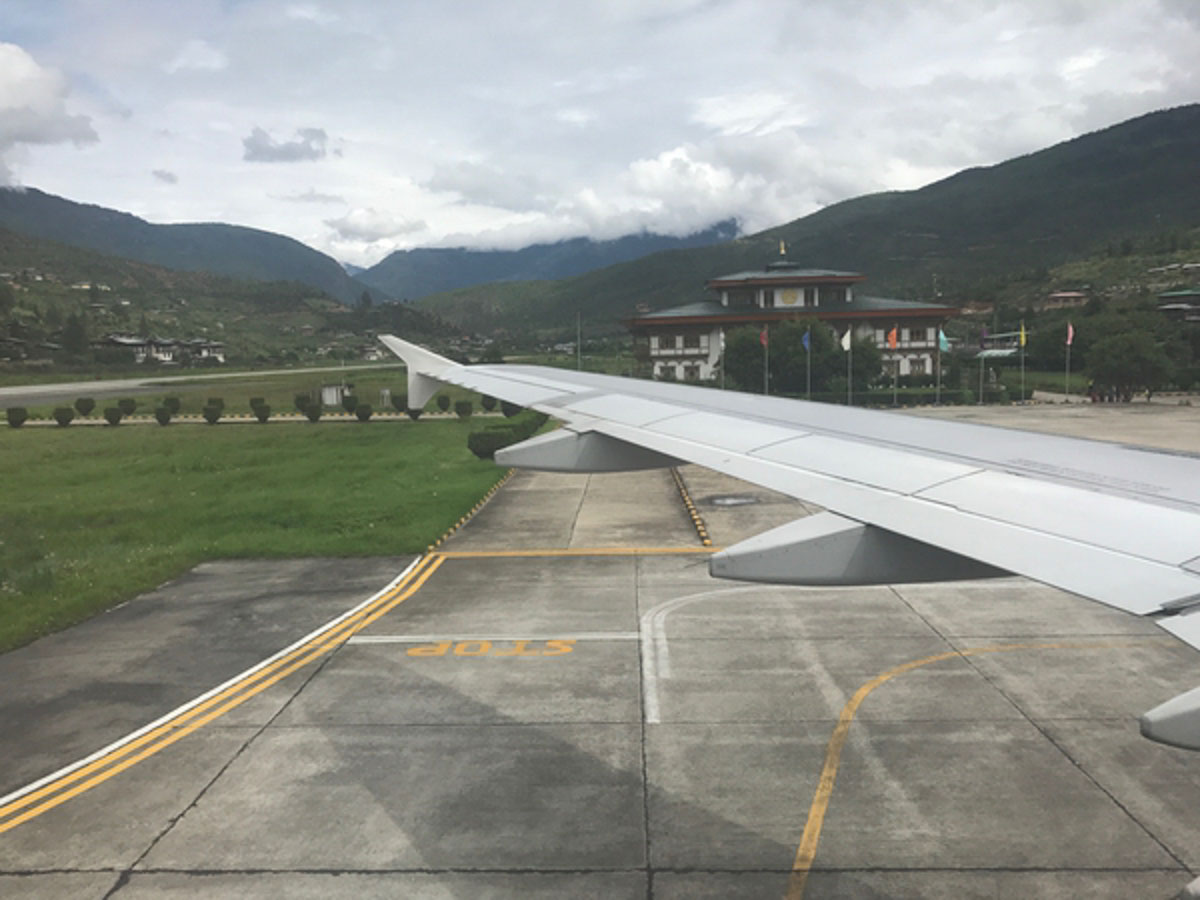 The Journey to the Bhutan Kingdom begins

Day 1: Settling in at Thimphu

After clearing our visa-on-arrival formalities, we hired a taxi to take us to Thimphu – the capital of Bhutan. Our car whizzed past along Paro river, farmlands, and temples. We had chosen to stay at the guesthouse at the Royal Thimphu College, a lovely campus built on the top of a mountainous stretch near Thimphu.

We started Day 2 early. The first task on our checklist was to visit the immigration office at Nordzin Lam and collect our permits to visit the Haa Valley. We then strolled down the length of Nordzin Lam in the direction of the Clock Town Square. The modern buildings in Thimphu have all adopted a design aesthetic close to the traditional Bhutanese architecture, and thus the old and new buildings sit together beautifully. We crossed a Buddhist temple, a movie hall, many shops and restaurants. Locals donning traditional Gho and Kira dresses hurried past the two ambling tourists. We had a sumptuous breakfast of waffles and coffee at Ambient – a lovely cosy cafe. 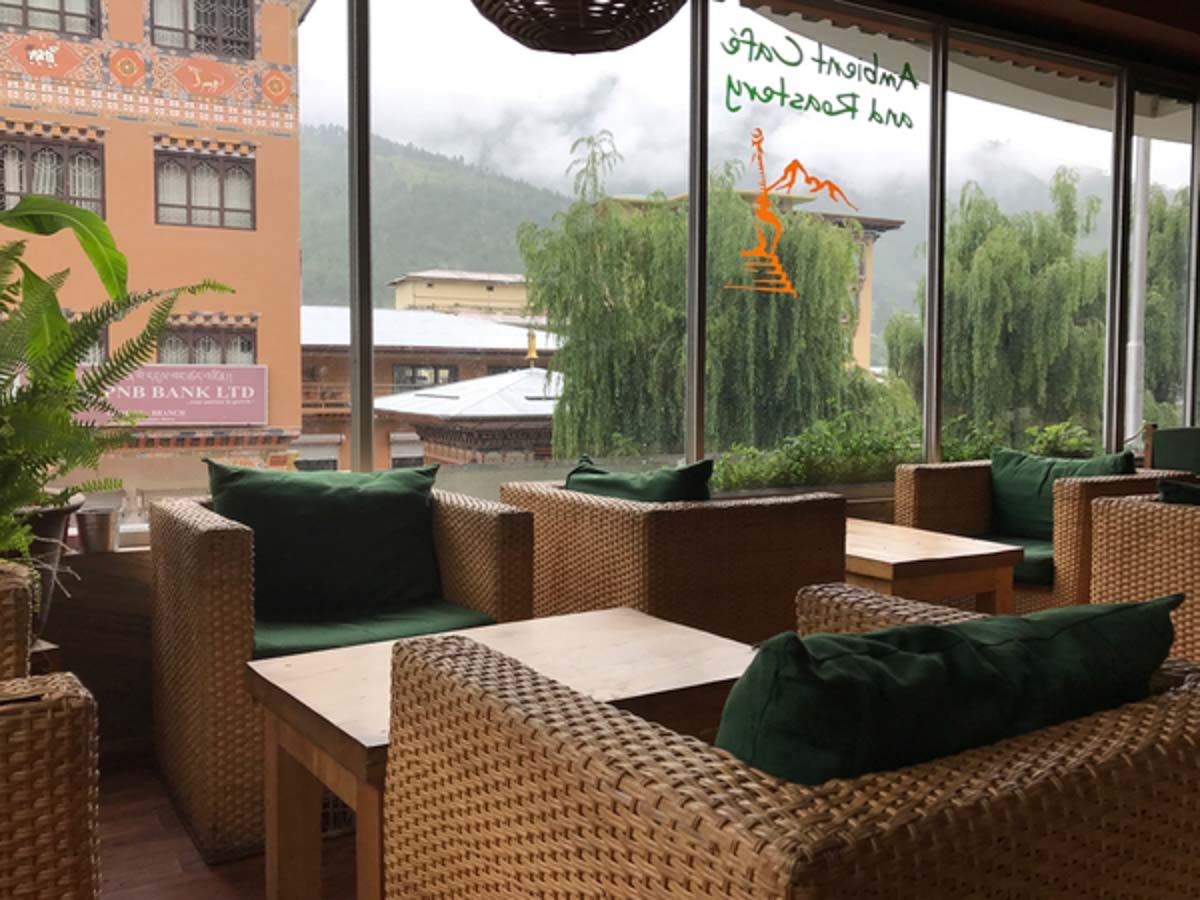 We flagged down a taxi to drive us to the Chokhi Traditional Art School. The art school near Thimphu runs intensive residential programs for underprivileged students in traditional Bhutanese arts and crafts. A teacher at the school, Sangay, took us on a tour of the school, where the students at different levels of expertise were immersed in learning painting, embroidery, wood carving, weaving et al. Each classroom was decked up with bright posters, striking masks and eclectic paraphernalia. A student painting an exquisite portrait of Lord Buddha grinned wide as I focused my camera on him. At the school store, we kicked off our shopping in Bhutan and picked up a few masks and paintings made by the students. 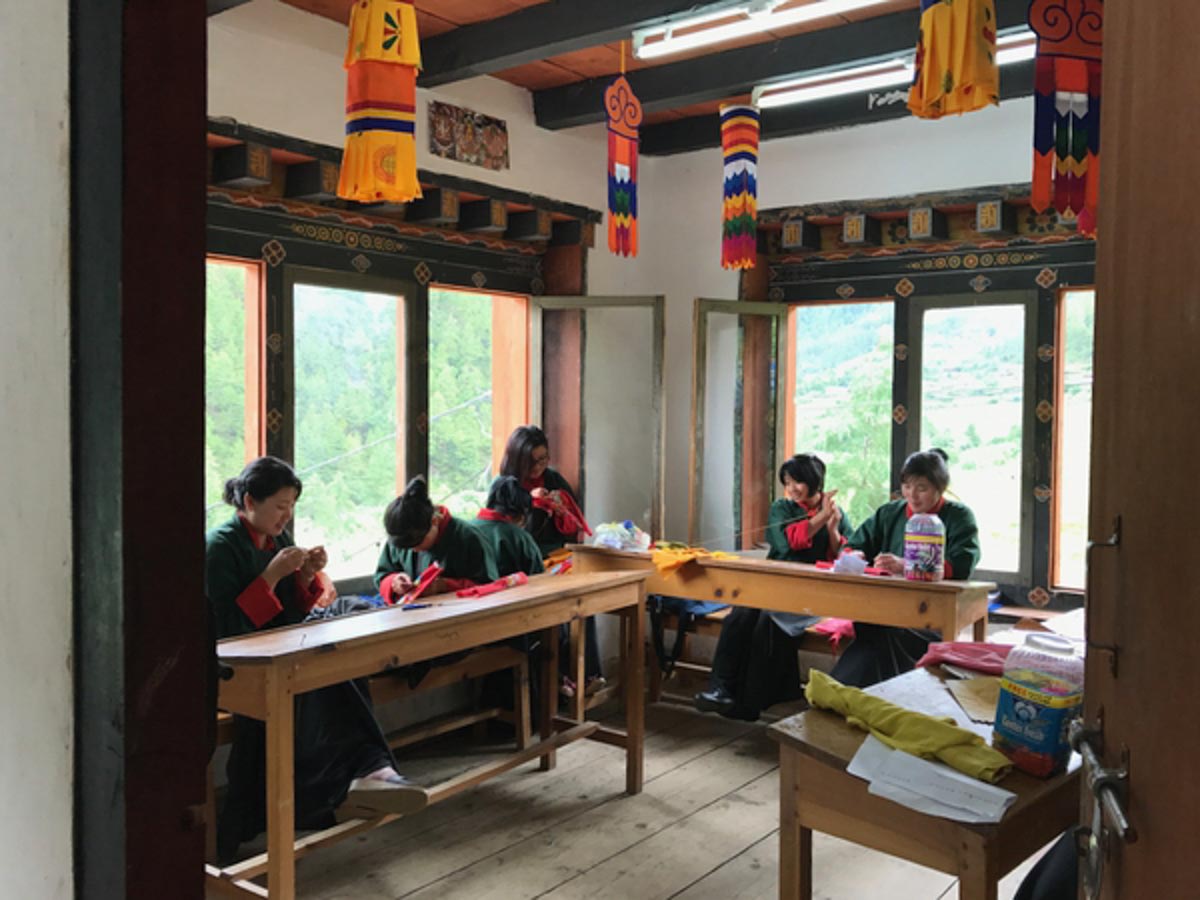 After relishing some Bhutanese food – the Ema Datshi and Saag Datshi – at the Musk restaurant at Clock Town Square, we decided to burn off the calories and walk down to the Tashichho Dzong, a top-rated Bhutan attraction. Given it houses the royal and government offices, the sprawling complex opens us to tourists between 5:30 and 6:30 in the evening. We purchased tickets for a tour, where a guide regaled us with facts and trivia. We learnt that Bhutan has never been colonised, perhaps a reason why its traditions and culture have been well protected and passed on across generations. The monarchy was established in 1907, with the coronation of the first Druk Gyalpo (King of Bhutan) – Gongsa Ugyen Wangchuck. We were also shown the living quarters of Je Khenpo – the spiritual leader of Bhutan who heads the central monastic body. 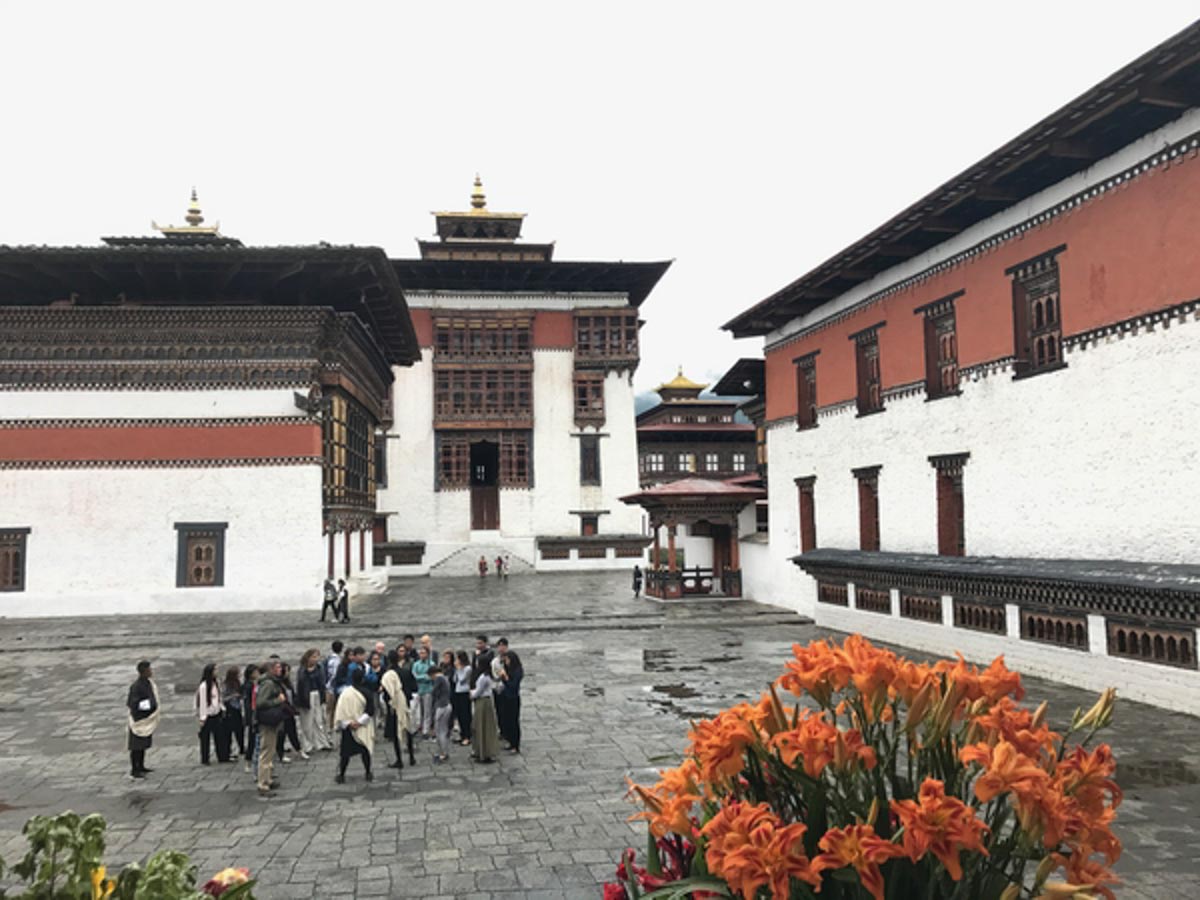 We hit Nordzin Lam again. The mood had transformed entirely post twilight. The formal Ghos and Kiras had given way to comfortable western wear, and the locals were heading out to gallivant and party. The Zone and Mojo Park are famous clubs among both tourists and locals. Wanting to sample Bhutanese cuisine again, we chose to have dinner at Bhutan Kitchen – the organic Bhutanese food spread was delicious! 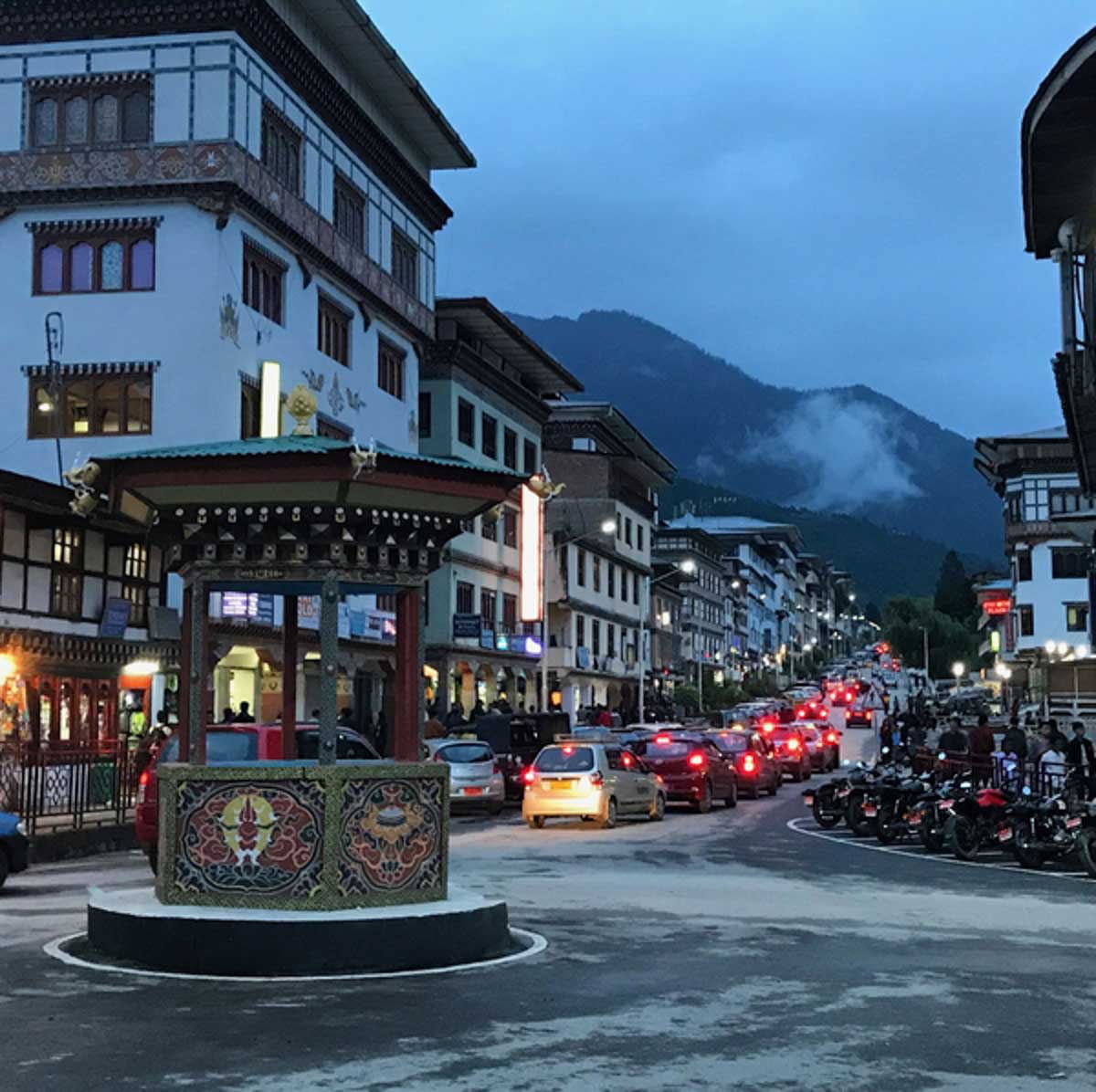 Perhaps it’s the clean air and the pristine beauty of the mountains that made us super active – we decided to start Day 3 with a somewhat strenuous climb on the upper reaches of Thimphu. Our destination was the Changangkha temple, a Buddhist temple established in the 12th century. Huffing and puffing our way up the final flight of steps, we were rewarded with a beautiful sight: crisscrossed strings of Buddhist prayer flags fluttering in the nippy breeze, clouds wafting in and out of the valley below, arrays of prayer wheels whirling together in sync. We were not allowed to take the camera inside the sanctum sanctorum (the general rule in Bhutan is that if you are asked to take off your shoes before entering a temple, photography won’t be allowed either). But we did get back with us memories of that surreal and moving experience – the christening of a newborn baby amidst the deep-throated chants of the monks. The idol of the Buddha at this temple is exquisitely crafted.

Walking back to the Thimphu valley, a game of archery at the Changlimithang Archery Ground caught our attention. A group of spectators were cheering on two teams engaged in a duel. Each bull’s eye was followed by a celebration – the team of four matching their dance steps in perfect unison. 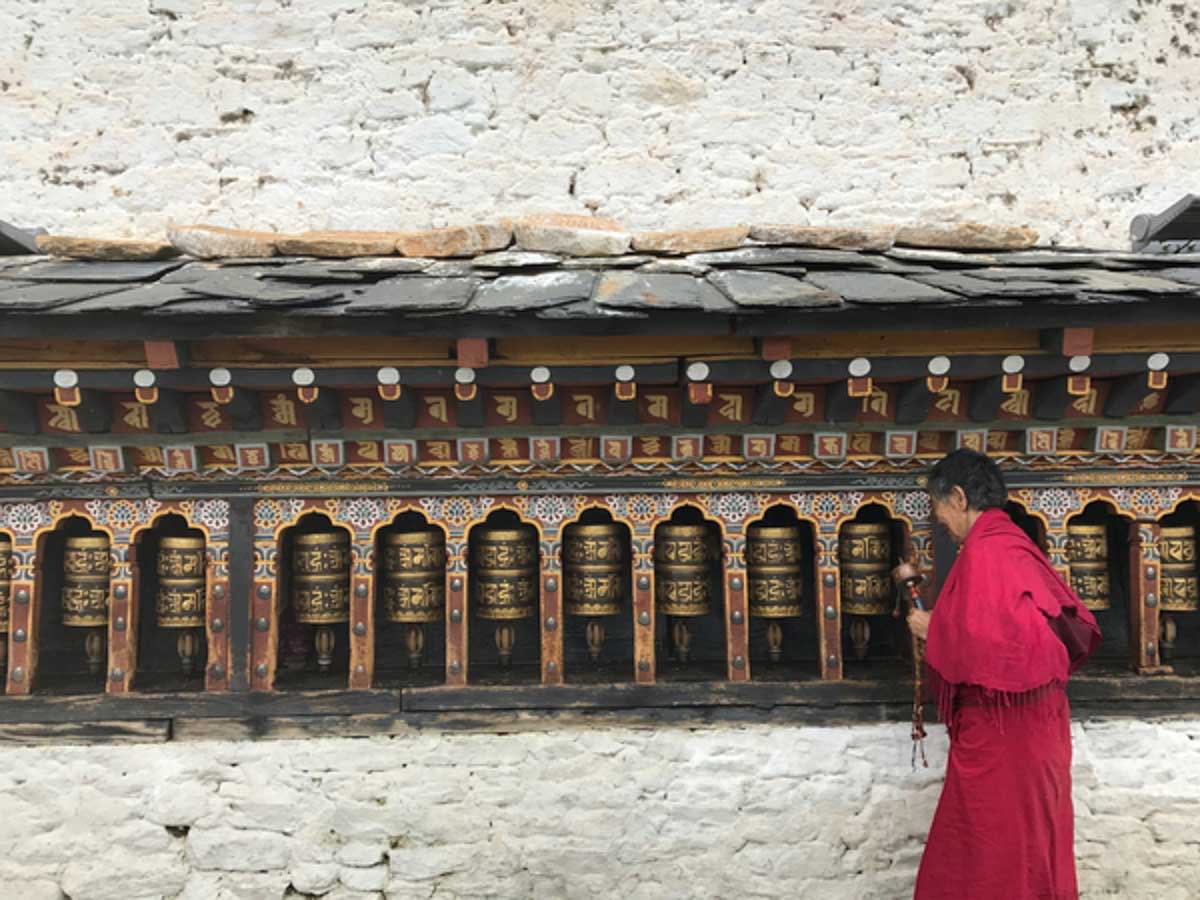 With our adventures in Thimphu over, we now drove back to Paro. I have often found taxi drivers to be a great source of tips, anecdotes and trivia, and this one was no exception. He shared the history of Dzongs (fortresses) across Bhutan as well as the famous Tiger’s Nest monastery at Paro.

Our destination was Nivaana, a homestay in the Paro valley away from the humdrum of the busy town area. A Bhutanese homestay experience had been highly recommended. Settling in our rooms, we could hear the chirping of the birds and the whirring of the crickets. 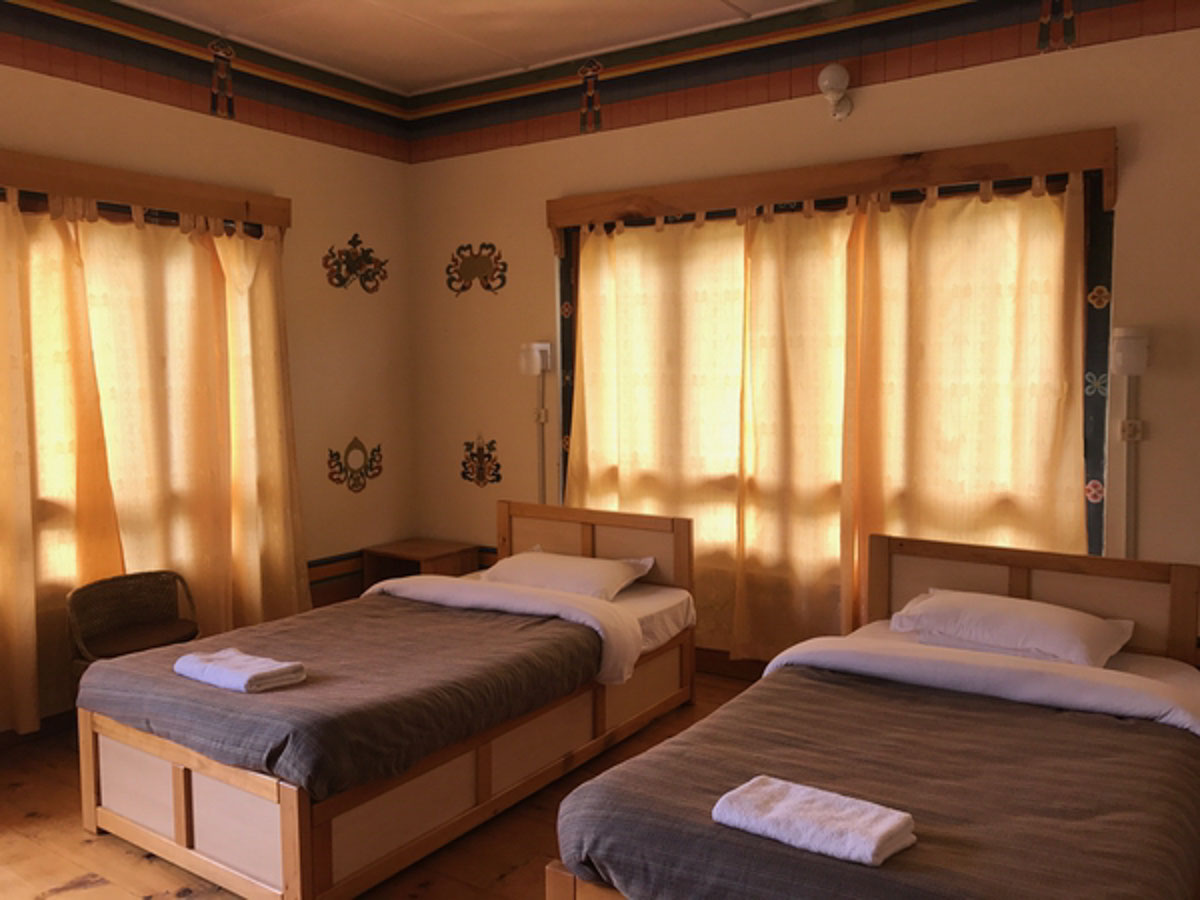 Day 4: Afternoon – A day trip to the Haa Valley

We reserved this day for a drive to the Haa Valley, about 70 km away from Paro and a top rated Bhutan tourist place. While an overnight stay at Haa was suggested by many guidebooks, we decided to return the same day given the paucity of time. We drove on winding hilly roads, past tall conifers and Buddhist temples. On reaching Chele La pass, the highest motorable pass in Bhutan, we stopped to have a cup of hot tea and admire the Himalayan vistas. At the Haa valley, we visited the Haa Dzong that now serves as the base for Indian Army as well as the Lhakhang Karpo temple. After a quick meal at a local restaurant, we headed back to Paro. Our spirits were lifted by the scenic drive and lilting Bhutanese pop being played on our taxi radio. 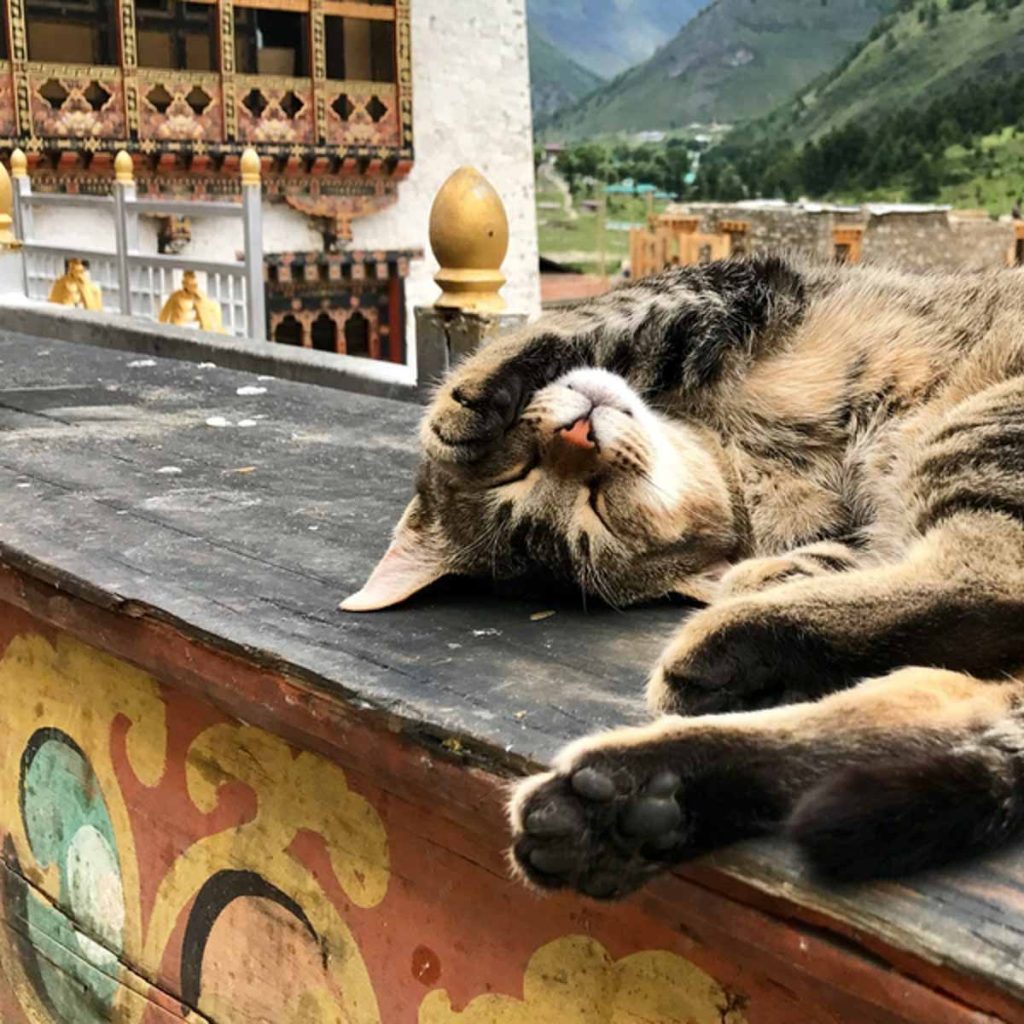 A resident at the Lhakhang Karpo in Haa Valley

We visited the majestic Paro Dzong (also known as Rinchen Pung Dzong). It was constructed in 1644 by Zhabdrung Ngawang Namgyal at the foundation of a monastery built by Guru Rinpoche. Walking across the bridge on the Paro river, we stopped to shoot a few Insta-worthy selfies. The steep flight of stairs to reach the Paro Dzong tested our fitness a bit. Entering the impressive central courtyard, we admired the colourful murals depicting Guru Rinpoche, the intricate wooden panels and a group of young monks immersed in studies (but occasionally breaking into a smile at the sight of two gawking tourists). 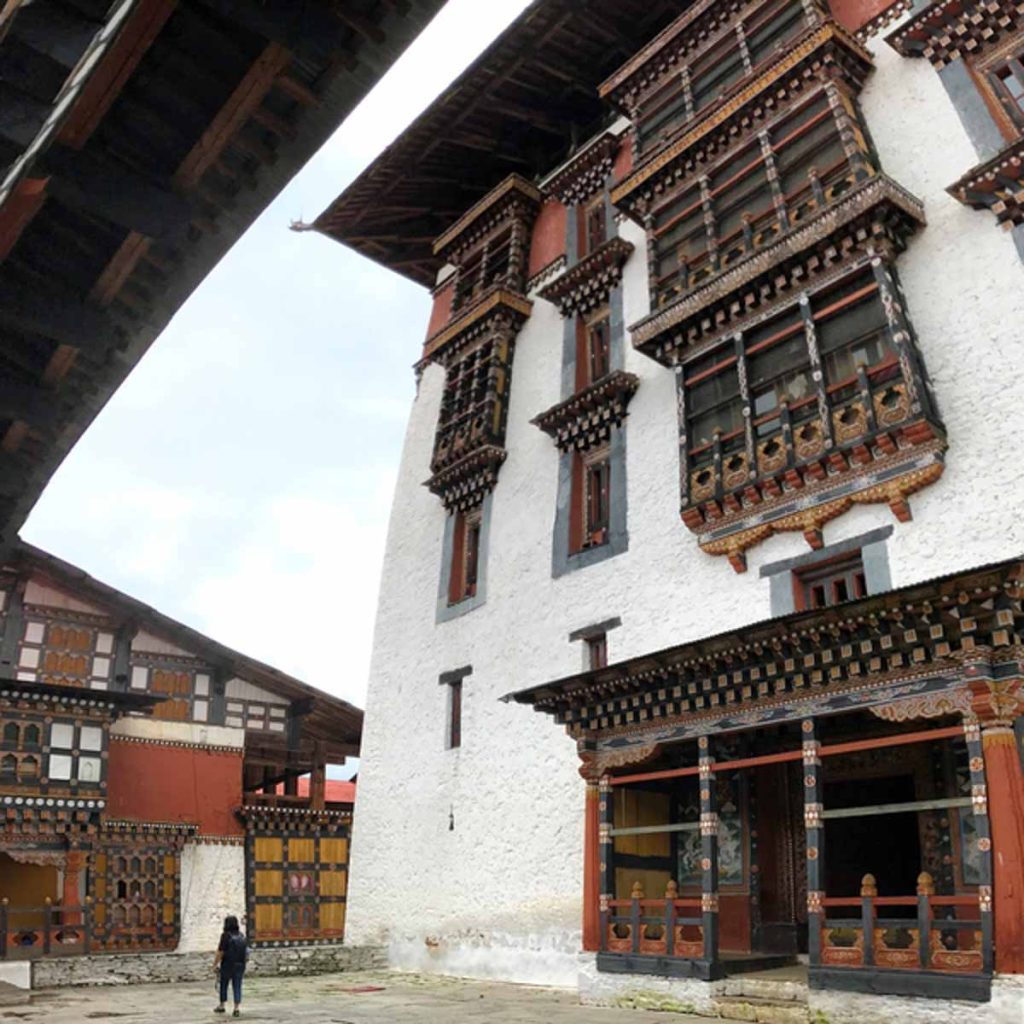 We then walked over to Paro town to have a dekko at the weekend market. Locals from in and around Paro had set up makeshift stalls selling things of daily need. Various items caught our fancy – Red shiny Bhutanese chillies, incense powders and herbs, handmade darts and knives.

On our way back to the homestay, we decided to stop by at the Jowo Temple of Kyichu, among the oldest temples in Bhutan. It was originally built in the 7th century by the Tibetan Emperor Songtsan Gampo. We were awed by the imposing idol of Guru Rinpoche as well as that of Buddha with eleven heads stacked up across five tiers. Interestingly, it is believed that the two orange trees in the courtyard bear fruit throughout the year. Well, the trees did have oranges hanging when we visited! 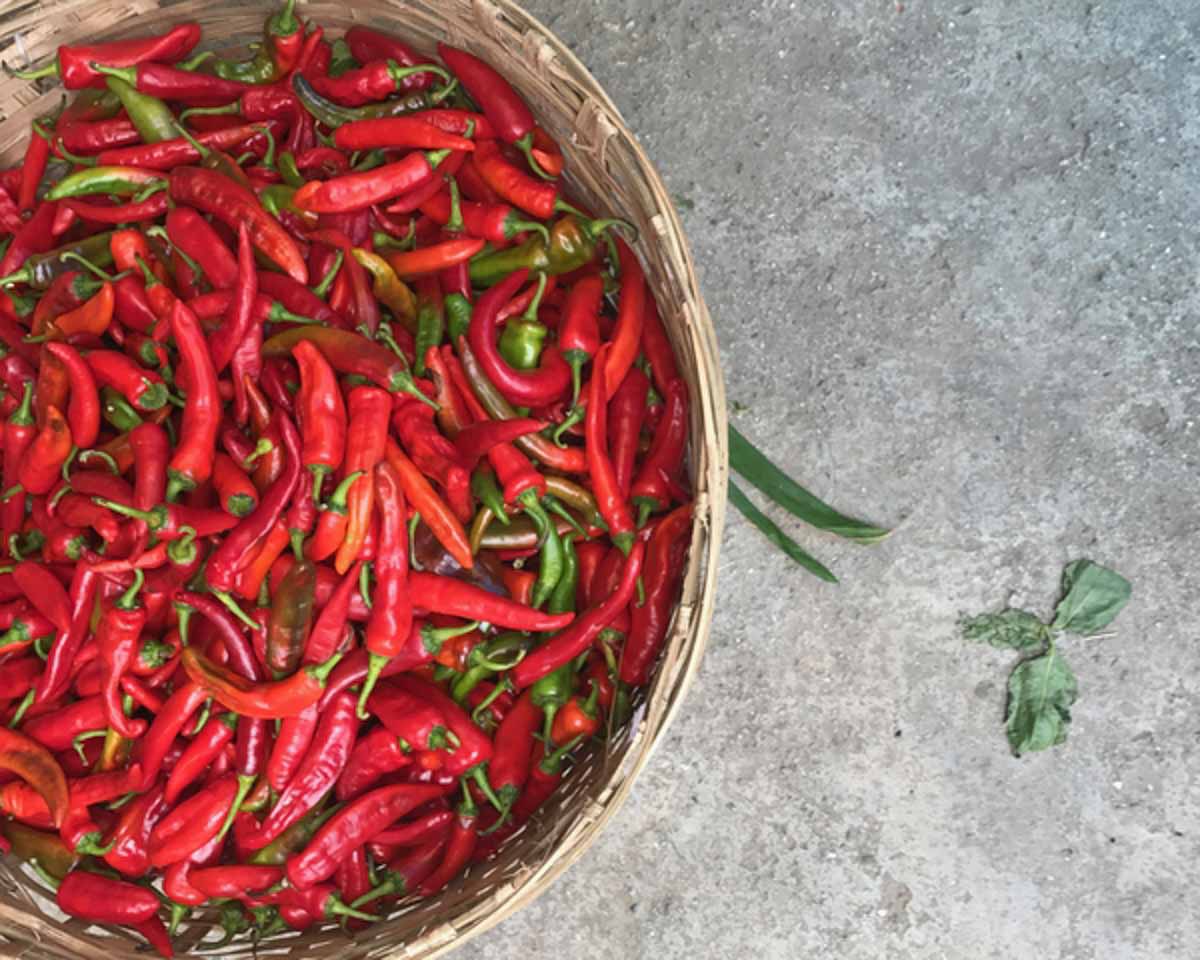 We did save the best for the last! While it does take considerable time and effort to trek up and down the steep hill, the Tiger’s Nest is the mainstay of Bhutan attractions. It is believed that Guru Rinpoche arrived at this spot on the back of a tigress and meditated in a cave for three years, three months, three weeks, three days and three hours in the 8th century. The sacred spot houses a temple complex that appears precariously balanced atop a 900 m high cliff. 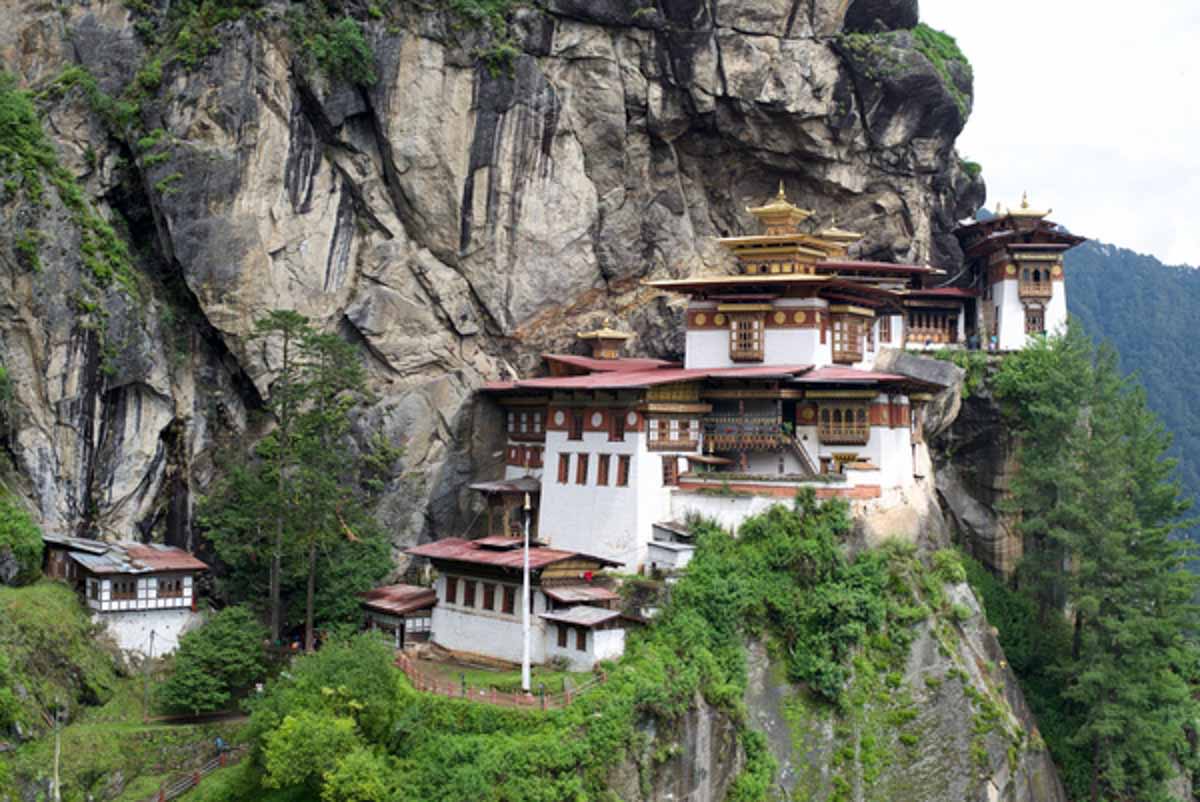 And with that, our fabulous holiday in Bhutan came to an end, but we made a promise to be back soon.

Get seasonal discounts from December to March.

Where to Stay in Thimpu:

Hotel Norbuling is a great option. At Paro, I stayed at Nivvana Lodge & Homestay.

In one of my pensive modes that came with my profession as a writer, looking at the bright screen, sitting in the dark cave that was my haven the other times, I realised I needed to pause. The best of escapes are the ones from where you returned with a purpose, a perspective or a… Continue reading “Wagah-Bonding”: Shedding inhibitions along the Indo-Pakistan borders

The Gateway to Old India: 7 Places in Kochi That Will Transport You Back in Time

Kochi or Cochin is lovingly called the Queen of the Arabian Sea. Once a flourishing port, today Kochi is a major metropolis in the southern Indian state of Kerala. This city is a mixture of many cultures. During the colonial era, it was first occupied by the Portuguese, then the Dutch and finally the British.… Continue reading The Gateway to Old India: 7 Places in Kochi That Will Transport You Back in Time

Sightseeing in Udaipur Through its Rich Heritage

Winter and Rajasthan are one of the most lethal combinations when it comes to a vacation! We explored the “City of Lakes,” Udaipur, during winter when it’s more cooling and windy. Accommodation in Udaipur On top of a mountain, with the cold and foggy weather, one can find Fatehgarh Palace with its quintessential Rajasthani marble inlays, chowks… Continue reading Sightseeing in Udaipur Through its Rich Heritage

Exploring the Best Places to Visit in Varanasi with Gitika

At first sight, Varanasi looks like any other overgrown, chaotic, and congested Indian town. But standing on the steps of one of its many ghats (a series of steps leading to the river) overlooking the expansive Ganga river, I was struck by the presence that only a city as ancient and layered as Varanasi could possess. “Benares… Continue reading Exploring the Best Places to Visit in Varanasi with Gitika